The Orthodox Church in America 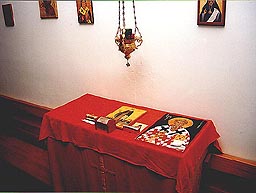 The Archdiocese ot Canada is part of the Orthodox Church in America (OCA).  Our Archbishop, His Eminence Irénée of Ottawa and all Canada,  is a member of the Holy Synod of Bishops of the OCA.  The Primate of  the OCA is His Beatitude Tikhon, Archbishop of Washington and Metropolitan of all America and Canada.

The first Orthodox communities in North America were founded by Russian missionaries in Alaska, over 200 years ago.  In 1970, the autocephaly (self-governing status) of the OCA, as daughter and successor of the original Russian mission and administration, was officially recognized and affirmed by the Russian Orthodox Church.

Today the OCA has thirteen dioceses and almost 600 parishes found throughout Canada, the United States and Mexico.  The OCA is a member of "The Assembly of Canonical Orthodox Bishops of the United States of America" and works together on international, national and local levels with Russian, Greek, Antiochian, Serbian, Ukrainian and other national Orthodox churches.